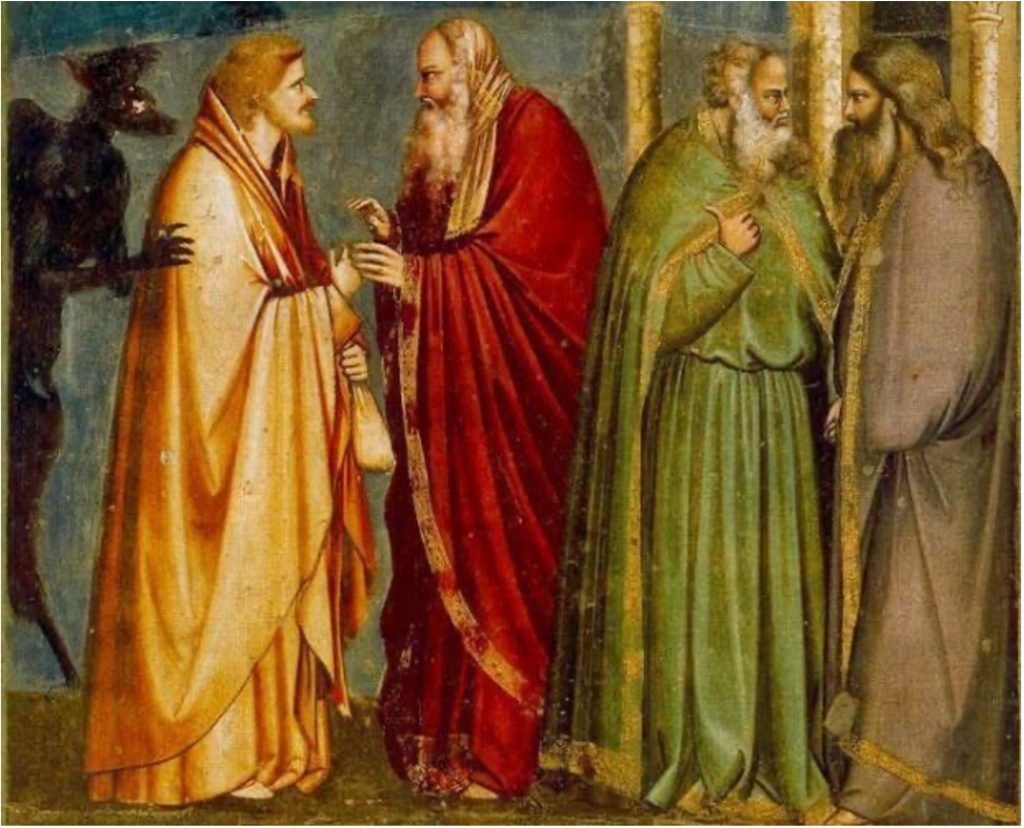 This day–Passion Sunday, also known as Judica Sunday because of the Introit Júdica me (Psalm 42)–memorializes the increasing antipathy against Christ from the Jews who would not accept Him and accused Him of sorcery and of being blasphemous and possessed by a devil. After today and until Easter, the Júdica me and the Glória patris at the Introit and Lavabo are omitted from Masses of the Season. This signifies Christ’s hiding His glory from the world during these next few weeks as He hides Himself away from the Jews until the time has come for Him to enter into Jerusalem (commemorated on Palm Sunday) and to be crucified (commemorated on Good Friday)–after which comes the Resurrection on Easter.

Today statues, Crucifixes, and other sacred images (except for the Stations of the Cross) are veiled with purple cloth beginning at the Vespers of Passion Sunday, and they remain covered until the Gloria of Holy Saturday, at which point Lent ends and Eastertide begins — a most glorious, beautiful moment in the Church’s liturgy. Some Catholics cover statues and icons, etc., in their homes for the same time period (the cloth shouldn’t be transluscent or decorated in any way).

Like the disappearence of the Gloria, this veiling of the statues and icons stems from the Gospel reading of Passion Sunday (John 8:46-59), at the end of which the Jews take up stones to cast at Jesus, leading Him to hide Himself away.

In Rome today, after Vespers, the veil used by St. Veronica to wipe the Face of Christ when He walked the Via Dolorossa (the Sorrowful Path) on His way to His Crucifixion is displayed for a few moments. The veil — known as the “veronica” — is kept hidden away in a special chapel in St. Peter’s Basilica, and only on Passion Sunday is it shown to the world as bells peal. 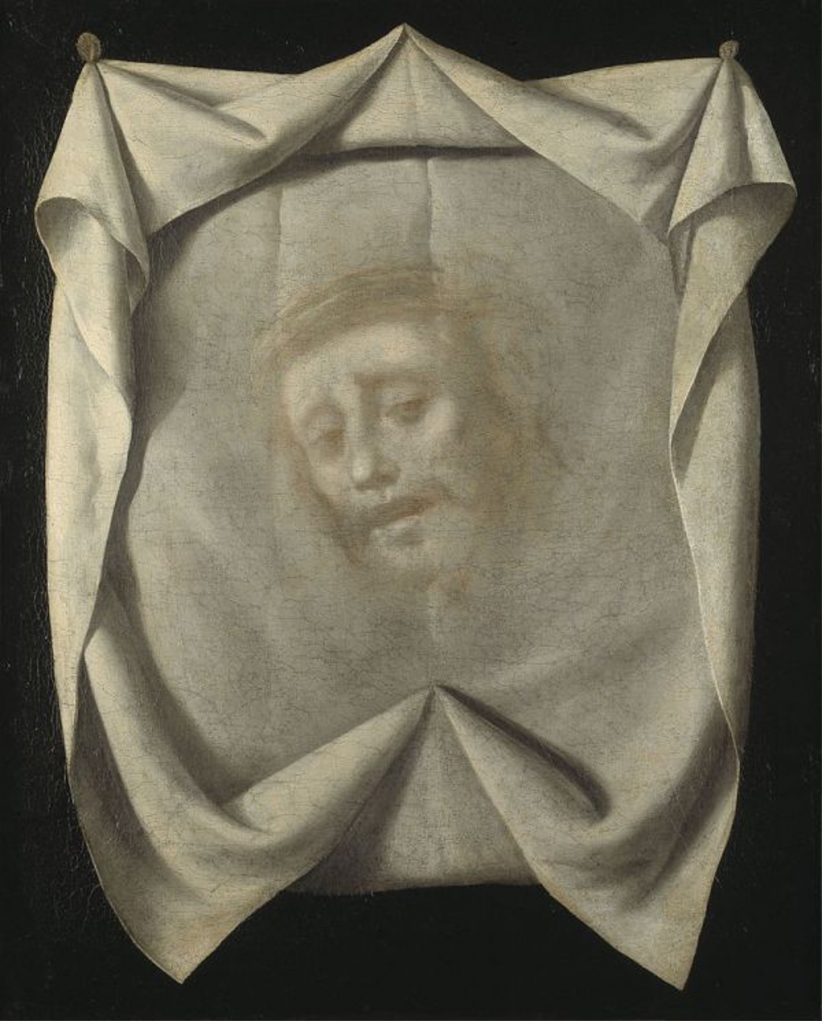 The holy liturgy is rich in mystery during these days of the Church’s celebrating the anniversaries of so many wonderful events; but as the principal part of these mysteries is embodied in the rites and ceremonies of the respective days, we shall give our explanations according as the occasion presents itself. Our object in the present chapter, is to say a few words respecting the general character of the mysteries of these two weeks.

We have nothing to add to the explanation, already given in our Lent, on the mystery of forty. The holy season of expiation continues its course until the fast of sinful man has imitated, in its duration, that observed by the Man-God in the desert. The army of Christ’s faithful children is still fighting against the invisible enemies of man’s salvation; they are still vested in their spiritual armour, and, aided by the angels of light, they are struggling hand to hand with the spirits of darkness, by compunction of heart and by mortification of the flesh.

As we have already observed, there are three objects which principally engage the thoughts of the Church during Lent. The Passion of our Redeemer, which we have felt to be coming nearer to us each week; the preparation of the catechumens for Baptism, which is to be administered to them on Easter eve; the reconciliation of the public penitents, who are to be readmitted into the Church on the Thursday, the day of the Last Supper. Each of these three object engages more and more the attention of the Church, the nearer she approaches the time of their celebration.

The miracle performed by our Savior almost at the very gates of Jerusalem, by which He restored Lazarus to life, has roused the fury of His enemies to the highest pitch of frenzy. The people’s enthusiasm has been excited by seeing him, who had been four days in the grave, walking in the streets of their city. They ask each other if the Messias, when He comes, can work greater wonders than these done by Jesus, and whether they ought not at once to receive this Jesus as the Messias, and sing their Hosanna to Him, for He is the Son of David. They cannot contain their feelings: Jesus enters Jerusalem, and they welcome Him as their King. The high priests and princes of the people are alarmed at this demonstration of feeling; they have no time to lose; they are resolved to destroy Jesus. We are going to assist at their impious conspiracy: the Blood of the just Man is to be sold, and the price put on it is thirty silver pieces. The divine Victim, betrayed by one of His disciples, is to be judged, condemned, and crucified. Every circumstance of this awful tragedy is to be put before us by the liturgy, not merely in words, but with all the expressiveness of a sublime ceremonial.

The catechumens have but a few more days to wait for the fount that is to give them life. Each day their instruction becomes fuller; the figures of the old Law are being explained to them; and very little now remains for them to learn with regard to the mysteries of salvation. The Symbol of faith is soon to be delivered to them. Initiated into the glories and the humiliations of the Redeemer, they will await with the faithful the moment of His glorious Resurrection; and we shall accompany them with our prayers and hymns at that solemn hour, when, leaving the defilements of sin in the life-giving waters of the font, they shall come forth pure and radiant with innocence, be enriched with the gifts of the holy Spirit, and be fed with the divine flesh of the Lamb that liveth for ever.

The reconciliation of the penitents, too, is close at hand. Clothed in sackcloth and ashes, they are continuing their work of expiation. The Church has still several passages from the saved Scriptures to read to them, which, like those we have already heard during the last few weeks, will breathe consolation and refreshment to their souls. The near approach of the day when the Lamb is to be slain increases their hope, for they know that the Blood of this Lamb is of infinite worth, and can take away the sins of the whole world. Before the day of Jesus’ Resurrection, they will have recovered their lost innocence; their pardon will come in time to enable them, like the penitent prodigal, to join in the great Banquet of that Thursday, when Jesus will say to His guests: ‘ With desire have I desired to eat this Pasch with you before I suffer.’

Such are the sublime subjects which are about to be brought before us: but, at the same time, we shall see our holy mother the Church mourning, like a disconsolate widow, and sad beyond all human grief Hitherto she has been weeping over the sins of her children; now she bewails the death of her divine Spouse. The joyous Alleluia has long since been hushed in her canticles; she is now going to suppress another expression, which seems too glad for a time line the present. Partially, at first, but entirely during the last three days, she is about to deny herself the use of that formula, which is so dear to her: Glory be to the Father, and to the Son, and to the Holy Ghost. There is an accent of jubilation in these words, which would ill suit her grief and the mournfulness of the rest of her chants.

Her lessons, for the night Office, are taken from Jeremias, the prophet of lamentation above all others. The colour of her vestments is the one she had on when she assembled us at the commencement of Lent to sprinkle us with ashes; but when the dreaded day of Good Friday comes, purple would not sufficiently express the depth of her grief; she will clothe herself in black, as men do when mourning the death of a fellow-mortal; for Jesus, her Spouse, is to be put to death on that day: the sins of mankind and the rigours of the divine justice are then to weigh him down, and in all the realities of a last agony, He is to yield up His Soul to His Father.

The presentiment of that awful hour leads the afflicted mother to veil the image of her Jesus: the gross is hidden from the eyes of the faithful. The statues of the saints, too, are covered; for it is but just that, if the glory of the Master be eclipsed, the servant should not appear. The interpreters of the liturgy tell us that this ceremony of veiling the crucifix during Passiontide, expresses the humiliation to which our Savior subjected Himself, of hiding Himself when the Jews threatened to stone Him, as is related in the Gospel of Passion Sunday. The Church begins this solemn rite with the Vespers of the Saturday before Passion Sunday. Thus it is that, in those years when the feast of our Lady’s Annunciation falls in Passion-week, the statue of Mary, the Mother of God, remains veiled, even on that very day when the Archangel greets her as being full of grace, and blessed among women.