Greetings from Mother Miriam from France! 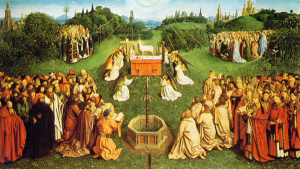 I know that you know and believe that! And I know and believe it. But I don’t know that I will ever get over it. How can the finite (and sinful) mind of mere creatures conceive of a God who would become one of us – knowing that, in becoming vulnerable to our depravity, we would nail Him to the Cross?

But He rose, He rose, He rose – from the dead to give us life. He knew the Father would raise Him from the dead – He came to die (as we wrote over and again in our Christmas newsletter). Yet that “plan from all eternity” did not lessen His sacrifice for us, nor the unfathomable truth that “For our sake (God) made Him to be sin who knew no sin, so that in Him we might become the righteousness of God” (2 Corinthians 5:21).