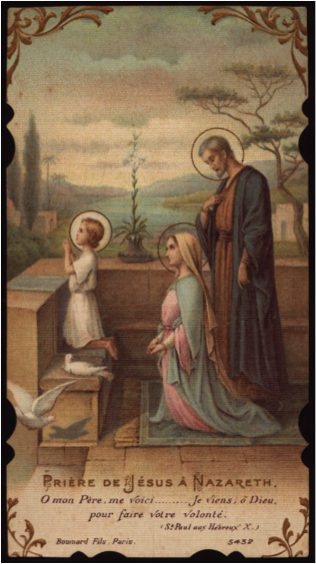 Prayer of Jesus of Nazareth:

Oh that every breathing soul would echo our Lord’s words. Oh that His will would be our food!

I am writing to you, dear Family, after so so long (the first since our Christmas newsletter!), and on the heels of the Supreme Court’s ruling on so-called “same-sex marriage.” I highlight “so-called” because that is what it is – simply “called” marriage. But, we know, in fact, that there can be no marriage between two parties of the same sex.

What a tragic day for the (again “so-called”) United States of America – which are hardly “united” in this imposed, Godless, evil decision to turn our nation yet further from God and put countless souls on the road to perdition. The Apostle Paul’s words in his letter to the Romans might have been written today:

For I am not ashamed of the gospel: it is the power of God for salvation to every one who has faith, to the Jew first and also to the Greek. For in it the righteousness of God is revealed through faith for faith; as it is written, “He who through faith is righteous shall live.

“For the wrath of God is revealed from heaven against all ungodliness and wickedness of men who by their wickedness suppress the truth. For what can be known about God is plain to them, because God has shown it to them. Ever since the creation of the world His invisible nature, namely, His eternal power and deity, has been clearly perceived in the things that have been made. So they are without excuse; for although they knew God they did not honor Him as God or give thanks to Him, but they became futile in their thinking and their senseless minds were darkened. Claiming to be wise, they became fools, and exchanged the glory of the immortal God for images resembling mortal man or birds or animals or reptiles…