I have been waiting to send you this most glorious Consecration to St. Joseph by Father Donald Calloway, MIC. If you are anything like me, you might have a few questions about this Consecration: Why is it “for such a time as this”? What if I have already consecrated myself to the Blessed Mother, or to Jesus through Mary? What about other forms and commitments to prayer? And what if I hardly know St. Joseph?

Not to worry. All these questions and more are answered in Father Calloway’s description below and further in the book. I urge you to read Father’s note below through to the end, and then, if you wish to get started and could use a bit of help in purchasing the book, Father Calloway has generously donated 80 books to us for whomever asks! Simply email us with your address and we’ll get them in the mail to you as long as our supply lasts. Of course, you can always go to Father’s website at: www.consecrationtostjoseph.org.

God bless you. It is no secret that we are in the fight of our lives – for freedom of religion, for the restoration of the orthodox teaching of our Holy Catholic Church, for the family, for the return of fallen-away Catholics and for the millions of souls who are without God and without hope.

Here, then, is Father’s Calloway’s message. It is ‘gold’ and, I believe, exactly what Our Blessed Mother has ordered!

Our love, prayers, and gratitude to Father Calloway,

“I did not understand St. Joseph well enough, but that will change.”
— St. John of the Cross 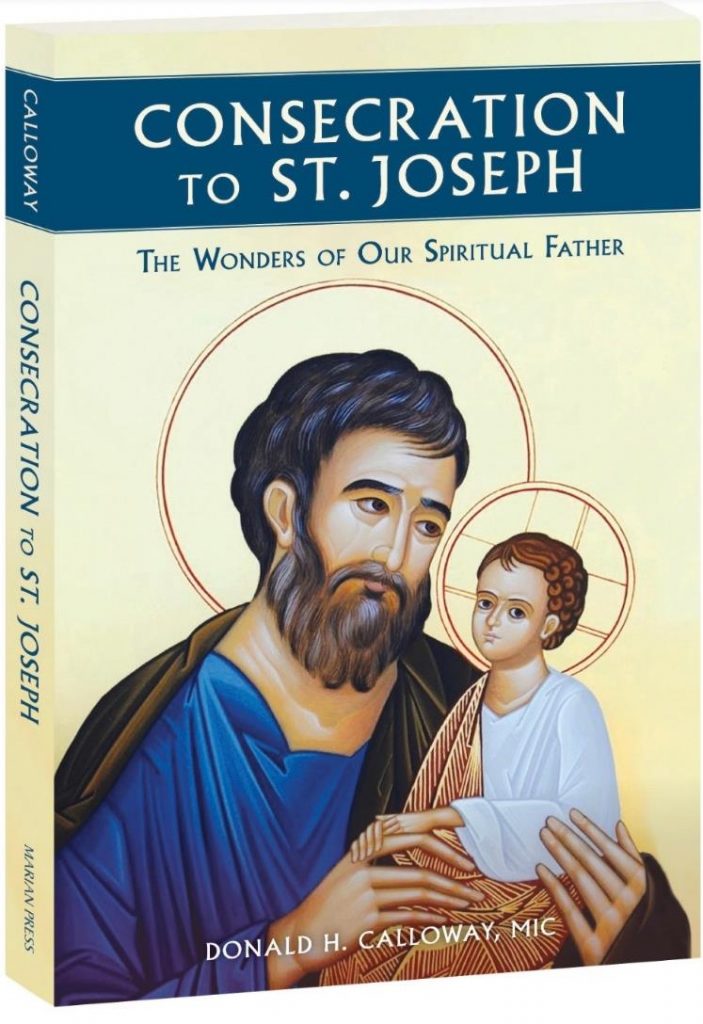 What about you? Do you know St. Joseph? Do you feel you understand his greatness and love for you?

Saint José Manyanet, a priest in 19th-century Spain, fervently promoted devotion to St. Joseph and the Holy Family. He prophesied that a “time of St. Joseph” would soon arrive in the life of the Church. He wrote:

I believe that the true time of Saint Joseph has not arrived yet: after two thousand years we started only now to glimpse something of the mystery in which he is immersed.

Well, my friends, I firmly believe that in our day the Lord wants to direct our hearts, families, parishes, dioceses, and Church to St. Joseph in a major way. In 1961, St. Pope John XXIII made a profound statement about St. Joseph. He wrote:

In the Holy Church’s worship, right from the beginning, Jesus, the Word of God made man, has enjoyed the adoration that belongs to him, incommunicable as the splendor of the substance of his Father, a splendor reflected in the glory of his saints. From the earliest times, Mary, his mother, was close behind him, in the pictures in the catacombs and the basilicas, where she was devoutly venerated as “Holy Mother of God.” But Joseph, except for some slight sprinkling of references to him here and there in the writings of the Fathers [of the Church], for long centuries remained in the background, in his characteristic concealment, almost as a decorative figure in the overall picture of the Savior’s life. It took time for devotion to him to go beyond those passing glances and take root in the hearts of the faithful, and then surge forth in the form of special prayers and of a profound sense of trusting abandonment. The fervent joy of pouring forth these deepest feelings of the heart in so many impressive ways has been saved for modern times!

Here is a list a list of remarkable events that have taken place over the past 150 years that show St. Joseph’s increasing importance in the life of the Church. They clearly indicate that we are living in an unprecedented time of St. Joseph.

1871 — Founding of the Josephites by Cardinal Herbert A. Vaughan

1873 — Founding of the Congregation of St. Joseph by St. Leonardo Murialdo

1879 — Apparitions at Knock, Ireland. Saint Joseph appears with the Blessed Virgin Mary, St. John the Apostle, and Jesus (appearing as the Lamb of God).

1904 — Saint André Bessette constructs an oratory dedicated to St. Joseph in Montreal, Canada. It expands, is declared a minor basilica, and finally is completed in 1967. Today, it is known as St. Joseph’s Oratory and is considered by many to be the preeminent international center of devotion to St. Joseph.

1908 — Saint Luigi Guanella begins constructing a church dedicated to St. Joseph in Rome. It is completed and consecrated as a basilica in 1912.

1914 — Saint Luigi Guanella founds the Pious Union of St. Joseph for the Salvation of the Dying.

1917 — Apparitions at Fatima, Portugal. During the last apparition on October 13, St. Joseph appears holding the Child Jesus and blessing the world.

1921 — Pope Benedict XV inserts the phrase “Blessed be St. Joseph, her most chaste spouse” into the Divine Praises.

1950s — The alleged apparitions of Our Lady of America given to Sr. Mary Ephrem emphasize a renewed devotion to St. Joseph, and St. Joseph himself speaks to the visionary about this devotion.

1955 — Venerable Pope Pius XII establishes the Feast of St. Joseph the Worker, to be celebrated on May 1.

Whoa! Did you know all that? Most people are unaware of these remarkable events. Without exaggeration, the Church has done more to promote St. Joseph in the last 150 years than in the previous 1,800 years of Christianity! But why now? Why St. Joseph?

There are many reasons, but I believe there are two that are especially important.

First, we need the spiritual fatherhood of St. Joseph to help us protect marriage and the family. Marriage and the family have always been under attack, but in modern times, the threats have reached extraordinary heights. Many people no longer know what it means to be a man or a woman, let alone what constitutes a marriage and a family. Many countries even claim to have redefined marriage and the family. There is great confusion on these matters, greater confusion than in any previous era of human history. The Servant of God Sr. Lucia dos Santos, the longest-lived visionary of the Fatima apparitions, knew the seriousness of the times and made a powerful statement about this issue. She wrote:

The final battle between the Lord and the kingdom of Satan will be about marriage and the family.

To combat and overcome Satan’s deceptions, the Church needs St. Joseph. His example and protection are the only way out of the confusing mess we are in. Who else can we turn to who can help us understand what marriage and the family are all about if not to the Head of the Holy Family and our spiritual father?

Second, the entire world needs to be re-evangelized, including the vast majority of baptized Christians. Saint Joseph was the first missionary. Today, he desires again to bring Jesus to the nations. Many nations and cultures that were previously Christian have fallen away from their Christian roots and are on a path of self-destruction. Countries once established on Judeo-Christian principles have become overrun by ideologies and organizations that seek to strip society of all that is sacred. Without a major turnaround, civilization itself is going to self-destruct.

In an apostolic exhortation on St. Joseph in 1989, St. John Paul II reminded us of the necessity of invoking St. Joseph in the work of re-evangelizing the world. He wrote:

This patronage [of St. Joseph] must be invoked as ever necessary for the Church, not only as a defense against all dangers, but also, and indeed primarily, as an impetus for her renewed commitment to evangelization in the world and to re-evangelization in those lands and nations where religion and the Christian life were formerly flourishing and are now put to a hard test.

Now is the time to consecrate yourself to St. Joseph! God is telling his Church that, in order to defend marriage and the family, elevate morals, recover lost ground, and win souls for Jesus Christ, we need to bring St. Joseph onto the battlefield. He is the Terror of Demons! With his powerful spiritual fatherhood, incredible love for his spiritual children, and constant intercession, the Church can be renewed as a light to the nations!