Critics of World Meeting of Families 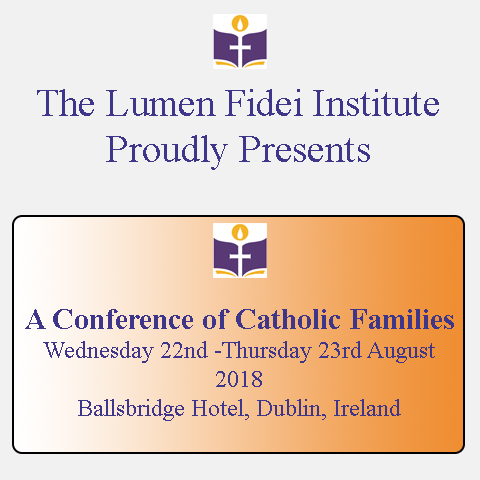 From the National Catholic Register – June 18, 2018 – by Kathy Shiffer

Two months before the Vatican-backed World Meeting of Families convenes in Dublin this August, an Irish organization has announced an alternative conference on families which will be held at the same time in nearby Ballsbridge.

The 2018 World Meeting of Families in Dublin, the official Vatican conference, has as its theme Pope Francis’ apostolic exhortation Amoris Laetitia. Pope Francis himself will be present and will speak, as he did when the World Meeting of Families was held in Philadelphia in 2015. Among the keynote speakers invited is Jesuit Fr. James Martin, who has called on the Church to embrace homosexual persons without requiring that they conform to the teachings of the Catholic Church regarding sexuality. Father Martin’s presentation is titled, “Exploring how parishes can support those families with members who identify as LGBTI+.” The WMOF program, including the presentation by Fr. Martin, has been approved by the Vatican’s Dicastery for Laity, Family and Life.

In contrast, the Conference of Catholic Families will focus on Pope Pius XI’s 1930 encyclical Casti Connubii, which addressed the topics of marriage, procreation and contraception almost 40 years before Paul VI’s Humanae Vitaewas published in 1968.

The Goal Is to Help, Not to Compete

Although the alternate conference is planned for the same time as the World Meeting of Families, the organizers’ goal is to help, rather than to compete. Anthony Murphy, director of the Lumen Fidei Institute, spoke to the British Catholic newspaper The Tablet, calling the alternative to the WMOF “our contribution to and in support of the World Meeting of Families” at a time when there is “so much confusion in the Church” regarding teachings on marriage and the family.

Murphy believed that rather than inviting Fr. James Martin, the WMOF organizers should have invited an apostolate like Courage International, which has been around, he said, “far longer than this publicity seeking priest.” Courage is an approved apostolate which counsels men and women with same-sex attractions, helping them to live chaste lives in fellowship, truth and love.

Information on the World Meeting of Families, including the WMOF speakers, itinerary and ticket information, can be found at the WMOF website. Tickets for the Conference of Catholic Families are available at the website of the Lumen Fidei Institute.