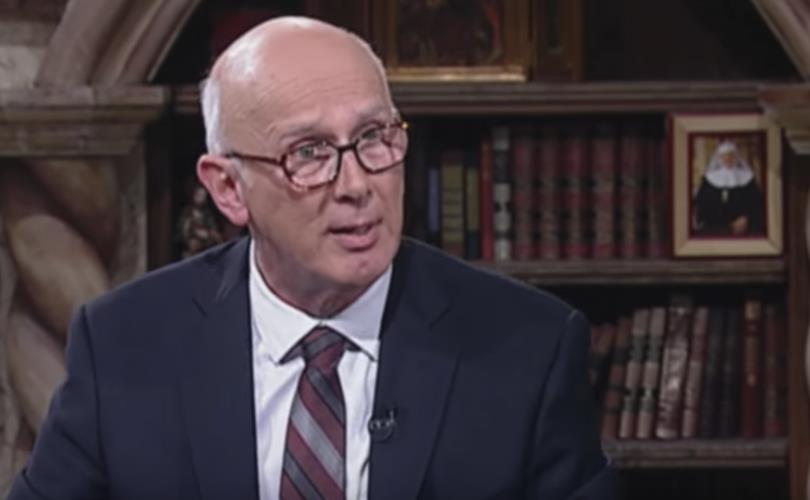 In a wonderful article titled “Karl Keating: In the vanguard of Catholic renewal,” published by the excellent apostolate Catholic Culture on January 26, 2018, Mr. Keating is rightly described as the “founder of Catholic Answers, easily the largest and most effective organization dedicated to Catholic apologetics in the world. He founded CA in 1979 and remained its president until he turned things over to Christopher Check in 2015.”

Many of you are aware that, in addition to being helped into the Church in no small way by the outstanding apologetics materials of Catholic Answers (including the much loved This Rock Magazine, now published as Catholic Answers Magazine), I had the privilege of working for Karl as an apologist and conference speaker for Catholic Answers for nine years prior to founding the Daughters of Mary, Mother of Israel’s Hope. I delight in any opportunity to say that I have not worked for or come under a more gifted, sincere, intelligent and kind gentleman and leader in the Faith. Karl is an uncompromising man of integrity whom I am honored to know. I can attest to the fact that he has chosen a worthy successor in Christopher Check.

In yesterday’s posting from LifeSiteNews, I was delighted to read the interview below referencing Karl’s latest book, and his thoughts on the current state of the Church. In the midst of the pain and confusion of our day, Karl’s words come across as they always have: with integrity, sanity and clarity.

September 19, 2018 (LifeSiteNews) – Veteran apologist, author, and Catholic Answers founder Karl Keating entered the arguably heated conversation on the Francis papacy in book form earlier this year with The Francis Feud: Why and How Conservative Catholics Squabble about Pope Francis.

In the book he looks at the ongoing debate over the world’s first Jesuit pope, in particular among Catholics of a conservative mindset – conservative being a term that he points out is not necessarily easily defined.

The debate on the pope has often pitted Catholics against one another, and, Keating says, brought about disagreements that are uncharacteristic of otherwise civil and logic-minded Catholics.

Keating said he wanted to examine the merits of arguments put forth about Pope Francis, including those in a number of the books that have been written examining his pontificate, for the purpose of achieving clarity.

The Francis Feud is available via e-book, paperback, and audiobook.

Below Keating speaks with LifeSiteNews about what led him to write the book, and shares his thoughts on current Church events and Francis’ papacy.

LSN: Was there something specific that prompted you to write The Francis Feud? If so, what and when was that?

KK: I had been engaged for months in online exchanges about Pope Francis with Catholics of various persuasions but chiefly with those on my side of the spectrum. I was surprised at how people who, in other circumstances, generally argued civilly and logically seemed to set aside decorum and even syllogisms when they disagreed with one another.

In The Francis Feud most of the people I mention are friends of mine–or at least acquaintances. I don’t doubt the good intentions of any of them, but there’s a lot of muddlement that works to no one’s advantage–and especially not to the Church’s. We’re in a crisis period, and clear thinking is a must.

LSN: What in particular led you to focus on the debate and discussion among (granted, the broad term) conservative Catholics? Was it simply the fact that reaction to the Francis papacy

consists of so much debate among conservative Catholics, or was there something else?

KK: This is my “camp” within Catholicism, so I was particularly interested in how those with whom I generally have few disagreements disagreed so vehemently with one another (and sometimes with me). The disagreements chiefly were about how to approach criticism of a reigning pope.

Some said laymen shouldn’t criticize a pope at all: to criticize would show a lack of respect for the papal office. Others were at the other pole, saying that there should be no limit on criticism, precisely because of the stakes involved: so, gloves off. I thought neither approach was doing much to foster understanding of what really was occurring. The crying need now is for clarity.

LSN: Explain for LifeSite readers what you hope to accomplish with the book.

KK: For forty years I’ve worked as a Catholic apologist. No one who dislikes argumentation enters apologetics. Argumentation is a good thing, but it needs to be done properly if it’s to have a useful result. Overly aggressive or overly defensive rhetorical postures can obscure facts and lead to wrong conclusions, and then nobody benefits.

This has been the most controversial papacy in memory. The goal of The Francis Feud is to help readers think through the issues by coming to understand the strengths and weaknesses of arguments presented by people on “our side.”

“All men by nature desire to know.” Those are the opening words of Aristotle’s Metaphysics. Today, Catholics desire to know what really is going on within the Church. They deserve to have that knowledge because we’re at an inflection point in history.

LSN: A lot has happened since your book was published, substantially affecting the conversation and the stakes involved. What thoughts do you have on the current stage of the sexual abuse crisis as it affects Pope Francis in the wake of the release of Archbishop Viganò’s testimony?

KK: Each week brings unhappy news–but, unexpectedly, consolation too. I recently posted at Facebook a meme that consisted of just these few words: “Oddly, a sense of peace, like a patient realizing a cure will come, though delayed.” That’s how I feel. I’m both distressed and relieved, annoyed and comforted.

No doubt we’re at the early stages of understanding the extent of the abuse, but, just as the genie can’t be put back in the bottle, so the facts that are coming out can’t be ignored, and more facts will follow. Some of the Usual

Suspects are trying to squeeze the genie back in, but it won’t work. Too much already is known, and too much is suspected.

“The truth will out,” said one of Shakespeare’s characters. Indeed it will, but we have to steel ourselves with the realization that, at least in the short term, it won’t be a pleasant truth. How can we expect it to be otherwise, when such immorality is involved?

LSN: In your view, how has the “Francis feud” changed (or not) in the recent months with numerous sexual abuse revelations in the Church, Archbishop McCarrick, the Pennsylvania grand jury report, and now the Viganò testimony?

KK: For the moment–and no doubt for months to come–the focus is on the sexual abuse problem and the cover-ups that have occurred at multiple levels within the Church. Almost certainly there will be further disturbing revelations.

In The Francis Feud I emphasize the importance of clarity in discussions. I have been citing Louis Brandeis’s aphorism that “sunshine is the best disinfectant.” It really is.

The Church can’t be hurt by the truth. After all, our Lord said he is “the way, the truth, and the life.” He is truth, so any truth we chase after will lead us closer to him. But truth isn’t necessarily comfortable. Often it’s painful, as in the current situation. We have to push through the pain to arrive at a true understanding of things.

I frequently bring up a quotation from Leo XIII’s 1891 encyclical Rerum Novarum. It’s one of those quotations remembered not quite as originally given, but I’m sure that Pope Leo wouldn’t object to the way its sticks in my mind.

Today we have a keen need to view the situation within the Church as it really is–and ourselves as we really are–neither dismissing nor exaggerating things. The crisis is so great that we need the precision of a top surgeon if we’re to make sense of things.

KK: I was born while Pius XII still was pope. I now have lived through seven papacies. For most of my life a Catholic largely could ignore what went on in Rome. He could be comfortable sailing along, not worrying about what was going on in the engine room.

Now many Catholics wonder what’s going on down there. They and their parents and grandparents had been brought up in what I like to call the Bing Crosby Church, as exemplified in that actor’s films: “no need to get involved or think about things; if there’s a problem, just let Father handle it.”

That doesn’t work any longer, and it hasn’t worked for a long time. Pope Francis told us to “make a mess.” A mess indeed has been made, and we have to acknowledge that he has had a big part in making it. This is unprecedented in recent centuries. It’s become a dizzying ride, and there likely will be more dizziness ahead.

I hope The Francis Feud helps readers understand how to think about these matters, because thinking is what we need more of: solid, logical, unfearful thinking, even if it leads us to places we never thought we’d visit.