The Lord is now near;
O come, let us adore Him. 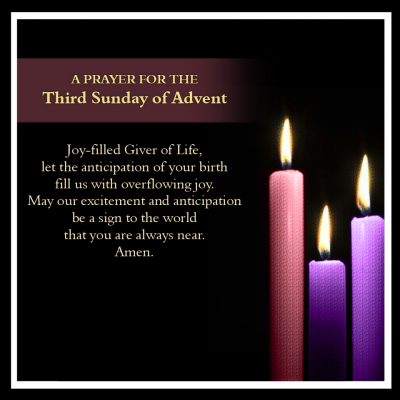 “The Mystery of Advent”

If, now that we have described the characteristic features of Advent which distinguish it from the rest of the year, we would penetrate into the profound mystery which occupies the mind of the Church during this season, we find that the mystery of the Coming, or Advent, of Jesus is at once simple and threefold. It is simple for it is the one same Son of God that is coming; it is threefold because He comes at three different times and in three different ways.

This, then, is the mystery of Advent. Let us now listen to the explanation of this threefold visit of Christ, given to us by Peter of Blois, in his third sermon de Adventu: ‘There are three comings of our Lord; the first in the flesh; the second in the soul; the third at the judgment. The first was at midnight according to those words of the Gospel: At Midnight there was a cry made, Lo, the Bridegroom cometh! But this first coming is long since past for Christ has been seen on the earth and has conversed among men. We are now in the second coming, provided only we are such as that He may thus come to us; for He has said that if we love Him, He will come unto us and take up His abode with us. So that this second coming is full of uncertainty to us; for who, save the Spirit of God, knows them that are of God? They that are raised out of themselves by the desire of heavenly things, know indeed when He comes, but whence He cometh or whither He goeth they know not. As for the third coming, it is most certain that it will be, most uncertain when it will be; for nothing is more sure than death, and nothing less sure than the hour of death. When they shall say, peace and security, says the apostle, then shall sudden destruction come upon them, as the pains upon her that is with child, and they shall not escape. So that the first coming was humble and hidden, the second is mysterious and full of love, the third will be majestic and terrible. In His first coming, Christ was judged by men unjustly; in His second, He renders us just by His grace; His third, He will judge all things with justice. In His first, a lamb; in His last, a lion; in the one between the two, the tenderest of friends.’

END_OF_DOCUMENT_TOKEN_TO_BE_REPLACED

All Updates from Mother