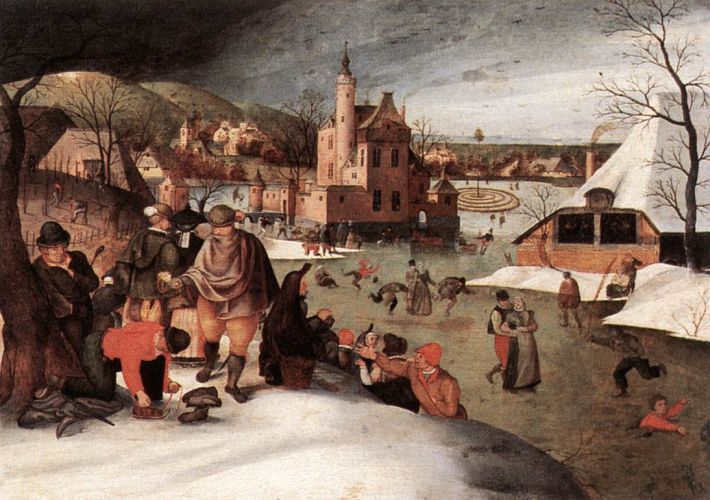 Wednesday, Friday, and Saturday after Gaudete Sunday (3rd Sunday of Advent) are known as “Advent Embertide,” and they come near the beginning of the Season of Winter (December, January, February). Liturgically, the readings for the days’ Masses follow along with the general themes of Advent, opening up with Wednesday’s Introit of Isaias 45: 8 and Psalm 18:2 :

Drop down dew, ye heavens, from above, and let the clouds rain the Just:
let the earth be opened and bud forth a Savior. The heavens show forth the glory of God:
and the firmament declareth the work of His hands.

Wednesday’s and Saturday’s Masses will include one and four Lessons, respectively, with all of them concerning the words of the Prophet Isaias except for the last lesson on Saturday, which comes from Daniel and recounts how Sidrach, Misach, and Abdenago are saved from King Nabuchodonosor’s fiery furnace by an angel. This account, which is followed by a glorious hymn, is common to all Embertide Saturdays but for Whit Embertide. (1)

Four times a year, the Church sets aside three days to focus on God through His marvelous creation. These quarterly periods take place around the beginnings of the four natural seasons 1 that “like some virgins dancing in a circle, succeed one another with the happiest harmony,” as St. John Chrysostom wrote (see Readings below).

These four times are each kept on a successive Wednesday, Friday, and Saturday and are known as “Ember Days,” or Quatuor Tempora, in Latin. The first of these four times comes in Winter, after the the Feast of St. Lucy; the second comes in Spring, the week after Ash Wednesday; the third comes in Summer, after Pentecost Sunday; and the last comes in Autumn, after Holy Cross Day.

Their dates can be remembered by this old mnemonic:

For non-Latinists, it might be easier to just remember “Lucy, Ashes, Dove, and Cross.” (2)

Since the late 5th century, the Ember Days were also the preferred dates for ordination of priests. So during these times the Church had a threefold focus: (1) sanctifying each new season by turning to God through prayer, fasting and almsgiving; (2) giving thanks to God for the various harvests of each season; and (3) praying for the newly ordained and for future vocations to the priesthood and religious life. (6)

Vigils and Ember Days no longer oblige to fast and abstinence. However, the liturgical renewal and the deeper appreciation of the joy of the holy days of the Christian year will result in a renewed appreciation as to why our forefathers spoke of “a fast before a feast.” There is no fast before any feast-day, but a suggestion that the devout will find greater Christian joy in the feasts of the liturgical calendar if they freely bind themselves, for their own motives and in their own spirit of piety, to prepare for each Church festival by a day of particular self-denial, penitential prayer and fasting. (3)

The Ember Days of December
by Abbot Gueranger

Today the Church begins the fast of the Quattuor Tempora, or as we call it, of the Ember Days. As we have seen, this observance is not peculiar to the Advent Liturgy; it is one which has been fixed for each of the four seasons of the ecclesiastical year. The intentions which the Church has in the fast of the Ember Days are the same as those of the Synagogue–namely, to consecrate to God by penance the four seasons of the year. The Ember Days in Advent are known in ecclesiastical antiquity as the fast of the tenth month (the ancient meaning of ‘December’); and St. Leo, in one of his sermons on this fast, of which the Church has inserted a passage into the Office of the Third Sunday of Advent, tells us that a special fast was fixed for this time of the year, because the fruits of the earth had then all been gathered in, and that it behooved Christians to testify their gratitude to God by a sacrifice of abstinence– thus rendering themselves more worthy to approach God, the more they were detached from the love of created things. “For fasting,” adds the Holy Doctor, “has ever been the nourishment of virtue. Abstinence is the source of chaste thoughts, of wise resolutions, and of salutary counsel. By voluntary mortifications, the flesh dies to its concupiscence, and the spirit is renewed in virtue. But since fasting alone is not sufficient whereby to secure the soul’s salvation, let us add to it works of mercy towards the poor. Let us make that which we retrench from indulgence, serve unto the exercise of virtue. Let the abstinence of him that fasts, become the meal of the poor man.”

Let us, the children of the Church, practice what is in our power of these admonitions; and since the actual discipline of Advent is so very mild, let us be so much the more fervent in fulfilling the precept of the fast of the Ember days. By these few exercises which are now required of us, let us keep up within ourselves the zeal of our forefathers for this holy Season of Advent. We must never forget that although the interior preparation is what is absolutely essential for our profiting by the coming of Our Lord Jesus Christ, yet this preparation could scarcely be real unless it manifested itself by the exterior practices of religion and penance.

The fast of the Ember Days has another object besides that of consecrating the four season of the year to God by penance: it has also in view the ordination of the ministers of the Church, which takes place on Ember Saturday, and of which notice was formerly given to the people during the Mass of Ember Wednesday. In the Church of Rome the ordination held in the month of December was, for a long time, the most solemn of all; and it would appear, from the ancient chronicles of the Popes, that, excepting very extraordinary cases, the tenth month was, for several ages, the only time for conferring Holy Orders in Rome. The faithful should unite with the Church in this Her intention, and offer to God their fasting and abstinence for the purpose of obtaining worthy ministers of the Word of God and of the Sacraments, and true pastors of the people.

The Church does not read from the prophet Isaias on Ember Wednesday; She merely reads a sentence from the first chapter of St. Luke, which gives Our Lady’s Annunciation, to which She subjoins a passage from St. Ambrose’s Homily on that Gospel. The fact of this Gospel having been chosen for the Office and the Mass of today, has made the Wednesday of the third week of Advent a very marked day in the calendar. In several ancient Ordinaries, used by many of the larger churches, both cathedral and abbatial, we find that it prescribed that feasts falling on this Wednesday should be transferred; that the ferial prayers should not be said kneeling on this day; that the Gospel Missus Est, that is, of the Annunciation, should be sung at Matins by the celebrant vested in a white cope, with cross, torches and incense, the great bell tolling the meanwhile; that in abbeys, the abbot should preach a homily to the monks, as on solemn feasts. We are indebted to this custom for the four magnificent sermons of St. Bernard on our Blessed Lady, which are entitled: Super Missus Est.

The Mass of Ember Wednesday was formerly known as the Missa Aurea–the Golden Mass– due to the capital letters in the proper of this Mass being so frequently illuminated with gold ink, in the manuscript Missals of the Middle Ages. It was the custom for a priest in a white cope to sing the Gospel, rather than the deacon vested in violet. The Station for Wednesday was at St. Mary Major, on account of the Gospel of the Annunciation, which, as we have just seen, has caused this day to be looked upon as a real Feast of the Blessed Virgin Mary.

On Ember Friday, the Church likewise reads at Matins a sentence from St. Luke’s Gospel on the Visitation, to which She subjoins a portion of St. Ambrose’s homily upon that passage. Before the institution of the Feast of the Visitation in the 14th century, the Office and Mass of this day were the chief commemoration of this Mystery in the Liturgy.

On Ember Saturday, the lessons from Isaias are interrupted on this day also; and a homily on the Gospel of the Mass is read in their place. The primitive custom, in the Roman Church, was to hold ordinations in the night between Saturday and Sunday, just as Baptism was administered to the catechumens in the night between Holy Saturday and Easter Sunday. The ceremony took place toward midnight, and Sunday morning was always far advanced before the termination; so that the Mass of Ordination was considered as the Mass of Sunday itself.

Later on discipline was relaxed, and these severe vigils were given up. The Ordination Mass, like that of Holy Saturday, was anticipated; and as the Fourth Sunday of Advent and the Second of Lent had not hitherto had a proper Gospel, since they had not a proper Mass, it was settled, about the tenth or eleventh century, that the Gospel of the Mass of Ordinations should be repeated in the special Mass of the two Sundays in question (that of the 4th Sunday of Advent being the Gospel of St. Luke concerning the mission of St. John the Baptist).

The station of this day was at St. Peter’s on account of the Ordinations. This basilica was always one of the largest of the city of Rome, and was therefore the best suited for the great concourse of the people. (7)