Father Andrew Apostoli, EWTN host of Sunday Night Prime and a founder of the Community of the Franciscan Friars of the Renewal will be greatly missed by us and by the millions whose lives he affected for all eternity. Here is a wonderful article on Father from the EWTN Family through EWTN’s National Catholic Register: 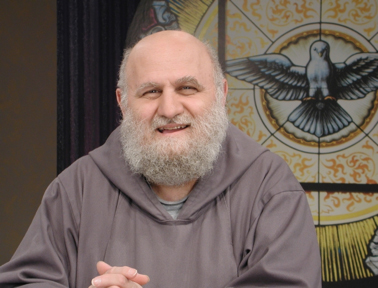 Father Andrew Apostoli Remembered as a

The EWTN Host and Franciscan Friar of the Renewal Co-Founder Dies Dec. 13 at Age 75

NEW YORK — Franciscan Father Andrew Apostoli, EWTN host of Sunday Night Prime and a founder of the Community of the Franciscan Friars of the Renewal, died Wednesday at age 75, after a battle with cancer during the last several months.

His death came the morning after the feast of Our Lady of Guadalupe, who is the patroness of the Community of the Franciscan Friars of the Renewal. Every friar is consecrated to her under this title.

“Father Andrew conformed his life to Christ’s,” said Father John Paul Ouellete, community servant (superior) of the Friars of the Renewal, upon Father Apostoli’s death. “As a priest, he was led by his relationship with the Holy Spirit, Our Lady and Archbishop Fulton J. Sheen, and continually worked toward the renewal of the priesthood.”

“As a Franciscan, St. Francis was the clear inspiration for his humility, humor and his simplicity in word and deed,” he added. “Father Andrew’s faithfulness and joy urge us to live the joy found in the Gospel.”

Father Apostoli was known to EWTN viewers who welcomed him into their homes for almost 25 years. This year marked his golden anniversary as a priest. He was ordained a priest to the Order of Friars Minor Capuchin March 16, 1967, at St. Francis de Sales Church in Geneva, New York, by Archbishop Fulton J. Sheen.

By 2001, Father Apostoli became an authority on Archbishop Sheen’s works and served as the vice postulator of the archbishop’s cause for canonization, on which he worked until his final illness. He called the media-savvy priest, who was declared “Venerable” by the Church in 2012, his “father in Christ.”

Read the remainder of the article including a video with Father Apostoli here (http://www.ncregister.com/daily-news/father-andrew-apostoli-remembered-as-bright-beacon-of-light)