Beloved, I highly recommend Regina Magazine to deepen our understanding and reverence for the Faith – the Faith once delivered to the saints!

The article below on Saint Athanasius, taken from Regina Magazine’s recent email mailing, is, to us, especially wonderful and indeed fitting in this time of confusion and apostasy. References are included below so that those who wish may read further on this glorious saint. 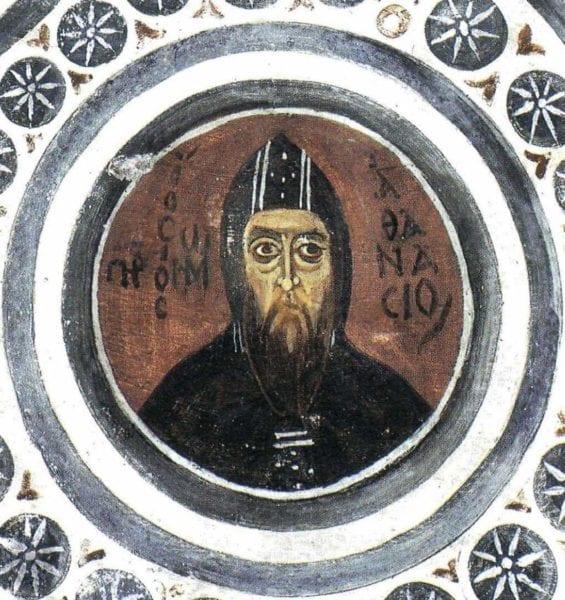 Saint Athanasius of Alexandria (born c. 296, died 2 May, 373), bishop and confessor, is a doctor of the Church. Athanasius was the greatest champion of Catholic belief on the subject of the Incarnation that the Church has ever known and in his lifetime earned the characteristic title of “Father of Orthodoxy”, by which he has been distinguished ever since. Athanasius was even known as Athanasius Contra Mundum (Athanasius against the World). Athanasius studied under Saint Anthony the hermit, (Athanasius wrote a book titled “Life of Saint Anthony”) then two years later became the understudy of Saint Alexander, the Patriarch of Alexandria.  Athanasius came to prominence during the Council of Nice, where he refuted the Arian heresy.

Father Francis Xavier Weininger, an erudite Austrian Jesuit who emigrated to the U.S about 1848, tells us in Saint Athanasius’ feast day REGINA article that Athanasius was desirous of leading a holy life when he went to the hermit Saint Anthony.

Father Weininger also tells us that shortly before the death of Saint Alexander Athanasius left the city secretly, fearing that he might be chosen as his successor. The Patriarch, informed of this, said with prophetic inspiration: “Athanasius, Athanasius, you think to save yourself by flight; but it will not release you from the Patriarchal Chair.”

“After the death of Saint Alexander, neither the clergy nor the people would have any other patriarch than Athanasius. For six months they searched everywhere for him, and at length, when he was found, he yielded with many tears to the general wish.”
Athanasius resisted at first, then probably realized: “If not me, then who?”

Author Sean Kater, in a REGINA article, tells us that Eusebius, a distant relative of Emperor Constantine, used his influence over the imperial family to advance himself and his network of fellow Arians. For decades, these conspirators used the power of the Church and state, public opinion and mob violence to repress and terrorize anyone who resisted or opposed them.

Kater further writes in his article that “Arianism, unlike other heresies, was not simply a set of ideas that appealed to a more or less limited set of people in the Church. It was not an esoteric or Gnostic school, a personality cult or an enthusiast craze. Rather, it was a massive conspiracy, a vehicle for the ambitions of designing men.”

Athanasius resisted when the hierarchy demanded he believe what they believed.  Sounds familiar to many Christians in modern times.

Kater connects ancient with modern times. He brings it all together succinctly here: “The crisis of our times, too, is partly about ideas — about truth, and the Faith. Today’s Arians believe that the content of the Faith and the nature and life of the Church can and must evolve over time. They work to revise the Church’s teaching, discipline and message to suit themselves. But they also collude to amass power and the spoils of victory: preferment, privilege, pleasure. They comprise a vast, far-flung network of networks, a super-clique resting its great bulk upon the Catholic world. In this way, and not only in terms of a debate with heterodoxy, faithful Catholics today are involved in a struggle like that of the Fathers in antiquity.”

Mistreatment by the Arians

Many have written about Saint Athanasius’ trials as a bishop (see reference list).  Athanasius was robbed of his bishopric, and mistreated by the hierarchy on a massive scale.  First, he was accused of murdering a Meletian bishop, Arsenius.  After his acquittal on this murder charge, new scandals were invented by the Arian bishops.  Athanasius found himself accused of raising sedition, promoting bloodshed, and keeping for himself corn intended for the poor. Consequently, he was brought up on charges of theft, assault, and even of causing a famine by interfering with food shipments. Assassination attempts were made against him according to the Catholic News Agency article listed below.

Yet. Athanasius persisted in teaching the one true orthodox faith. Be Like Athanasius!
In his lifetime, Saint Athanasius was exiled five times through the demands of bishops, enforced by various secular emperors, to include Constantine.

Many of these bishops were Arians who had taken over leadership roles of the Catholic church.  Athanasius stood firm in his faith, and never waivered.  Athanasius is known to have said “This storm will soon pass over.”

Another of his aphorisms was “I fear God only, not men.”

During his exiles, Saint Athanasius did not retreat.  He did not quit. He did not surrender. He held fast to the faith of the fathers of the Church, as presented to Saint Peter and the Apostles by Jesus Christ.  To get an idea how “times can be difficult for Catholics” I would encourage you to read about the life of another Athanasius, Bishop Athanasius Schneider and his family in his book “Dominis Est, It is the Lord.” Bishop Schneider’s family endured hardship, banishment to the gulag in Ural Mountains, and months without the Mass and the Eucharist. At times they traveled 60 miles one way to attend Mass.

“According to Arius, Jesus was the highest of created beings, and could be considered “divine” only by analogy. Arians professed a belief in Jesus’ ‘divinity,’ but meant only that he was God’s greatest creature.”

Athanasius knew this was nonsense, no matter how many bishops asserted this and what bishops said otherwise.  Author John Lilly, writing in an article for the National Catholic Register quoting Pope Benedict XVI, presents that Athanasius knew as a theologian that the incarnation of the Logos (the Word of God) “who became flesh and made his dwelling among us” was the Truth. (8)