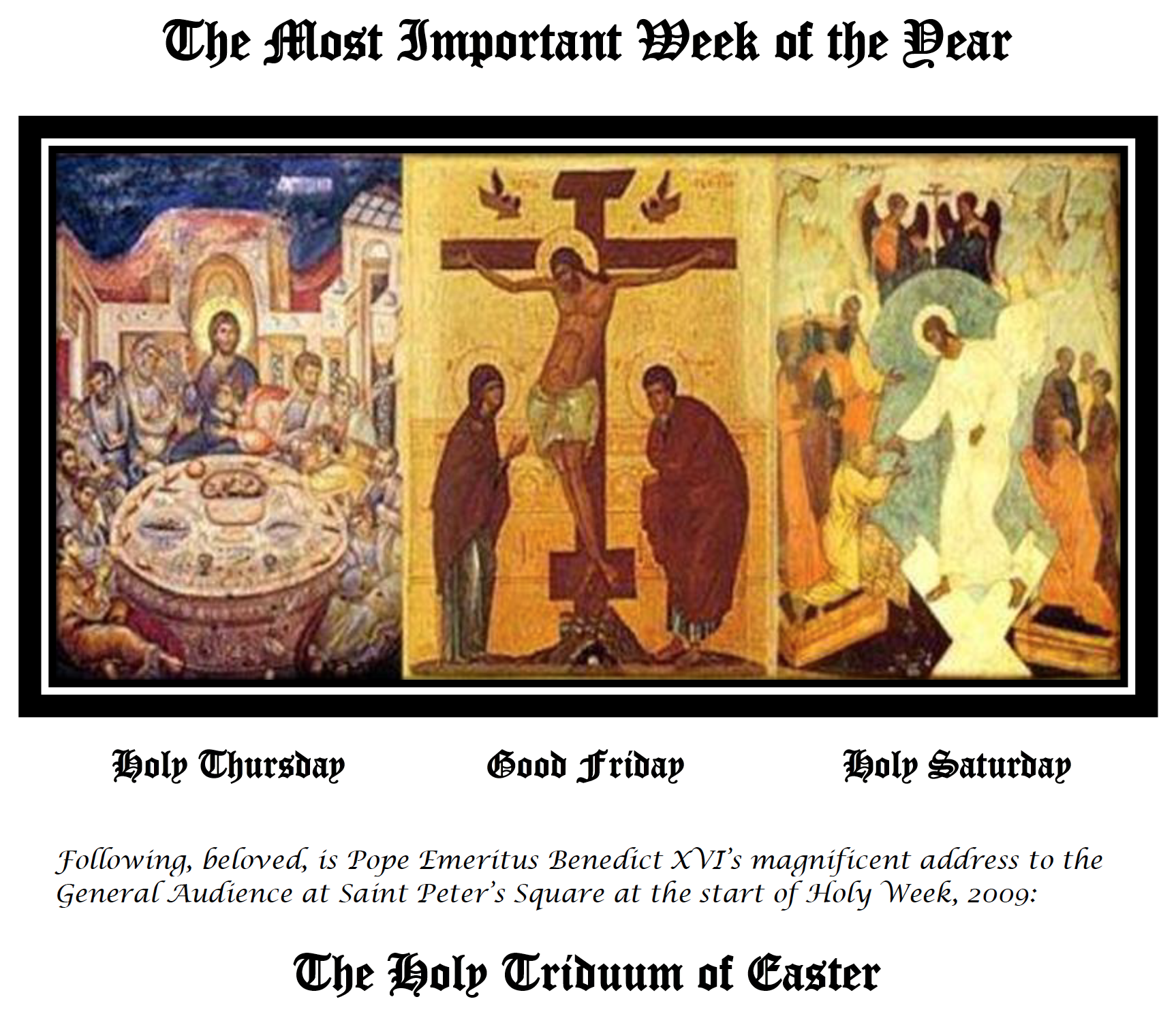 Holy Week, which for Christians is the most important week of the year, gives us the opportunity to immerse ourselves in the central events of the Redemption, to relive the Paschal Mystery, the great Mystery of faith . . . May divine grace open our hearts to an understanding of the invaluable gift of salvation, obtained for us by Christ’s sacrifice. We find this immense gift wonderfully described in a famous hymn contained in the Letter to the Philippians (cf. 2: 6-11), upon which we have meditated several times during Lent. The Apostle concisely and effectively retraces the mystery of the history of salvation, mentioning the arrogance of Adam who, although He was not God, wanted to be like God. And He compares the arrogance of the first man, which we all tend to feel in our being, with the humility of the true Son of God who, in becoming man does not hesitate to take upon Himself all human weaknesses, save sin, and going even as far as the depths of death. This descent to the ultimate depths of the Passion and death is followed by His exaltation, the true glory, the glory of love which went to the very end.

And it is therefore right as St Paul says that “at Jesus’ name every knee must bend in the heavens, on the earth and under the earth, and every tongue profess that Jesus Christ is Lord” (ibid., 2: 10-11). With these words, St Paul refers to a prophecy of Isaiah in which God says: I am God… to me every knee shall bend in Heaven and on earth (cf. Is 45: 23). This, Paul says, applies to Jesus Christ. He truly is, in His humility, in the true greatness of His love, the Lord of the world and before Him every knee bends.

How marvellous and at the same time surprising this mystery is! We can never sufficiently meditate on this reality. In spite of being God, Jesus does not want to make His divine prerogative an exclusive possession; He does not want to use His being as God, His glorious dignity and His power, as an instrument of triumph and a sign of remoteness from us. On the contrary, “He empties Himself”, taking on the wretched and weak human condition. In this regard Paul uses a rather evocative Greek verb to indicate the kénosis, this humbling of Jesus’.

In Christ the divine form (morphé) was hidden beneath the human form, that is, beneath our reality marked by suffering, by poverty, by our human limitations and by death. His radical, true sharing in our nature, a sharing in all things save sin, led Him to that boundary which is the sign of our finiteness, death. However, all this was not the fruit of an obscure mechanism or blind fatality: rather, it was His own free choice, through generous adherence to the Father’s saving plan. And the death He went to meet, Paul adds, was that of crucifixion, the most humiliating and degrading death imaginable. The Lord of the universe did all this out of love for us: out of love He chose “to empty Himself” and make Himself our brother; out of love He shared our condition, that of every man and every woman. Theodoret of Cyrus, a great witness of the Oriental tradition, wrote on this subject: “being God and God by nature and having equality with God He did not consider this something great, as do those who have received some honour greater than that which they deserve but, concealing His merits, He chose the most profound humility and took the form of a human being” (Commentary on the Epistle to the Philippians, 2: 6-7).

The prelude to the Easter Triduum which will begin tomorrow as I said with the evocative afternoon rites of Holy Thursday, is the solemn Chrism Mass, which the Bishop celebrates with His priests in the morning, and during which the priestly promises pronounced on the day of Ordination are renewed. This is a gesture of great value, an especially favourable opportunity in which priests reaffirm their personal fidelity to Christ who has chosen them as His ministers . . . Again, during the Chrism Mass the oil of the sick and that of the catechumens will be blessed and the Chrism consecrated. These are rites that symbolically signify the fullness of Christ’s Priesthood and the ecclesial communion that must inspire the Christian people gathered for the Eucharistic sacrifice and enlivened in unity by the gift of the Holy Spirit.

In the afternoon Mass, called in Coena Domini, the Church commemorates the institution of the Eucharist, the ministerial priesthood and the new Commandment of love that Jesus entrusted to His disciples. St Paul offers one of the oldest accounts of what happened in the Upper Room, on the vigil of the Lord’s Passion. “The Lord Jesus”, He writes at the beginning of the 50s, on the basis of a text He received from the Lord’s own environment, “on the night in which He was betrayed took bread, and after He had given thanks, broke it and said, “This is my body, which is for you. Do this in remembrance of me’. In the same way, after the supper, He took the cup, saying, “This cup is the new covenant in my blood. Do this, whenever you drink it, in remembrance of me'” (1 Cor 11: 23-25). These words, laden with mystery, clearly show Christ’s will: under the species of the Bread and the Wine, He makes Himself present with His body given and His Blood poured out. This is the sacrifice of the new and everlasting covenant offered to all, without distinction of race or culture. It is from this sacramental rite, which He presents to the Church as the supreme evidence of His love, that Jesus makes ministers of His

disciples and all those who will continue the ministry through the centuries. Thus, Holy Thursday constitutes a renewed invitation to give thanks to God for the supreme gift of the Eucharist, to receive with devotion and to adore with living faith. For this reason the Church encourages the faithful to keep vigil in the presence of the Blessed Sacrament after the celebration of Holy Mass, recalling the sorrowful hour that Jesus spent in solitude and prayer at Gethsemane, before being arrested and then sentenced to death.

And so we come to Good Friday, the day of the Passion and the Crucifixion of the Lord. Every year, standing in silence before Jesus hanging on the wood of the Cross, we feel how full of love the words were that He spoke on the previous evening during the Last Supper. “This is my blood, of the covenant, which is poured out for many” (Mk 14: 24). Jesus wanted to offer His life in sacrifice for the remission of humanity’s sins. As it does before the Eucharist, as well as before the Passion and death of Jesus on the Cross, the mystery eludes reason. We are placed before something which, humanly, may appear senseless: a God who is not only made Man, with all the needs of man, who not only suffers to save man, taking upon Himself the whole tragedy of humanity, but also dies for man.

Christ’s death recalls the accumulated sorrow and evils that weigh upon humanity of every age: the crushing weight of our death, the hatred and violence that still today stain the earth with blood. The Passion of the Lord continues in the suffering of human beings. As Blaise Pascal has rightly written: “Jesus will be in agony even to the end of the world. We must not sleep during that time” (Pensées, 553). If Good Friday is a day full of sorrow, it is therefore at the same time a particularly propitious day to reawaken our faith, to consolidate our hope and courage so that each one of us may carry our cross with humility, trust and abandonment in God, certain of His support and His victory. The liturgy of this day sings: O Crux, ave, spes unica Hail, O Cross, our only hope!

This hope is nourished in the great silence of Holy Saturday, in expectation of the Resurrection of Jesus. On this day the Churches are unadorned and no particular liturgical rites are scheduled. The Church keeps vigil in prayer like Mary and with Mary, sharing her same sentiments of sorrow and of trust in God. It is rightly recommended that a prayerful atmosphere be preserved throughout the day, favourable for meditation and reconciliation; the faithful are encouraged to receive the sacrament of Penance, to be able to take part in the Easter festivities truly renewed.

The recollection and silence of Holy Saturday will usher us into the night of the solemn Easter Vigil, “mother of all vigils”, when the hymn of joy in Christ’s Resurrection will burst forth in all the churches and communities. Once again the victory of light over darkness, of life over death will be proclaimed and the Church will rejoice in the encounter with her Lord. Thus we shall enter into the atmosphere of Easter.

Dear brothers and sisters, let us prepare to live the Holy Triduum intensely, in order to share ever more deeply in the Mystery of Christ. We are accompanied in this itinerary by the Blessed Virgin who silently followed her Son Jesus to Calvary, taking part with deep sorrow in His sacrifice and thus cooperating in the mystery of the Redemption and becoming Mother of all believers (cf. Jn 19: 25-27). Together with her we shall enter the Upper Room, we shall remain at the foot of the Cross, we shall watch in spirit beside the dead Christ, waiting with hope for the dawn of the radiant day of the Resurrection. In view of this, I express to you all from this moment my most cordial good wishes for a happy and holy Easter, together with your families, parishes and communities.